skip to main | skip to sidebar

Well, only three months in, and I *finally* got around to putting up the Mr. Linky.  That's not, you know, too bad, right?
I was thinking about dividing it up by religion, but a lot of books might deal with more than one.  So in order to lessen my load, I decided to just put up one massive Mr. Linky, where everyone can see what everyone has read, and maybe you'll get tricked into reading someone's review of something about the Jehovah's Witnesses or something.

This has been cross-posted from Bibliofreak.

Now that I’ve launched the World Religion Challenge website, I thought that I ought to go ahead and make my list.

But this is pretty tough for me.  I’m joining on the 3rd Path, the Universalist Path, which I also like to call the Above and Beyond Path, and I intend to go as high above and as far beyond as I have time for in 12 months.  So, my list is a little bit crazy.

Basically, I’ve gone around my house looking at the books I have that I’ve not read (I’m not much of a re-reader) and figured out which ARCs will fit that I’m getting or have gotten but won’t get to until January, and which books are on my challenge lists (whether I’ve acquired them yet or not) and which books I’ve always meant to read that I don’t have.

And this list is totally subject to change as I come across more and more books that fit the theme (and remember, I tend to find themes of religion in most things I read).

I’ve broken my list down by religion and added Amazon links, which hopefully will help others joining in on the fun.

The Art of Happiness in a Troubled World by the Dalai Lama
An Introduction to Zen Buddhism by by DT Suzuki
The Dharma Bums by Jack Kerouac
The Life of Milarepa: A New Translation from the Tibetan translated by Lobsang P. Lhalungpa
Buddha’s Wife by Gabriel Constans

Pilgrim’s Progress by John Bunyan
The Decameron by Giovanni Boccaccio
Mariette in Ecstasy by Ron Hansen
James the Brother of Jesus: The Key to Unlocking the Secrets of Early Christianity and the Dead Sea Scrolls by Robert H Eisenman
Pope Joan: A Novel by Donna Cross
The Bible: A Biography by Karen Armstrong
The Monastic Journey of Thomas Merton by Thomas Merton
Silence by Shusaku Endo
Baudolino by Umberto Eco

Saffron Dreams by Shailah Abdullah
Leap of Faith : Memoirs of an Unexpected Life by Queen Noor
The Koran translated by A. J. Arberry
The Reluctant Fundamentalist Mohsin Hamid
God Dies by the Nile by Nawal El Saadawi
God Has Ninety-Nine Names by Judith Miller

The Great Transformation: The Beginning of Our Religious Traditions by Karen Armstrong
A History of God: The 4,000-Year Quest of Judaism, Christianity and Islam by Karen Armstrong
What Is God? by Jacob Needleman
The Harvard Psychedelic Club: How Timothy Leary, Ram Dass, Huston Smith, and Andrew Weil Killed the Fifties and Ushered in a New Age for America by Don Lattin
Holy Madness: The Shock Tactics and Radical Teachings of Crazy-Wise Adepts, Holy Fools and Rascal Gurus by George Feuerstein

The Wandering Taoist by Deng Ming-Dao

Tribal Religions/Animism/Shamanism:
The Bone People by Keri Hulme
The Valley of Horses by Jean Auel

The Physick Book of Deliverance Dane by Katherine Howe

The Greatest Show on Earth: The Evidence for Evolution by Richard Dawkins

And I’m sure there will be more.

Buttons! We have buttons! 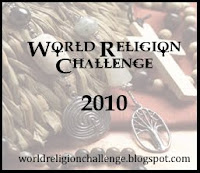 Aren't they amazing!  Admire them in their cross-cultural beauty!  Thanks so much to Rebecca from Just One More Page for making them!
Posted by J.T. Oldfield at 7:05 PM 7 comments:

Welcome to the World Religion Challenge!

After weighing the input of fellow readers and bloggers, I've decided to go ahead and host the World Religion Challenge in 2010.
The Challenge will run from Jan 1st 2010 to Dec 31st 2010.  There are four categories to the Challenge:
I decided to lift a note from Taoism by calling these Paths (Tao means "way" or "path") to Reading Challenge Enlightenment:
1. The Bare Bones Path (Also Know As: The *Technically* There's Only Three Path): Read something about what are *technically* the only world religions, Buddhism, Christianity, and Islam.  (These are considered, by some scholars, to be the only World Religions because while Judaism and Hinduism have the numbers, they don't proselytize or really invite other people to join, making it more of an ethnicity).
2. The Penthouse Path (Also Known As: The Five Biggies Path): Read something about the five major world religions: Hinduism, Buddhism, Judaism, Christianity, and Islam.
3. The Universalist Path (Also Known As: The Above and Beyond Path): Read something by all five of the major world religions PLUS more books about any or all of the following: Shintoism, Animism, Taoism, Confucianism, Wicca, Mythology, Atheism, Occult, Tribal Religions, Voodoo, Unitarianism, Baha'i, Cults, Scientology, Mysticism, Rastafarianism, Jainism, Sikhism, Zorastrianism, Agnosticism, Gnosticism, Satanism, Manichaeism, Deism, Comparative Religion, Religious Philosophy, Jungiansim,  Symbolism, Church of the Flying Spaghetti Monster, etc., etc. etc. (you may also read about another aspect of one of the 5 Biggies)
4. The Unshepherded Path (Also Known As: The Don't Tell Me What to Do Path): Read as many books as you would like about whatever religions you want.
What to read?
Nonfiction
fiction
religious texts
poetry
and if your eyeballs are ready to fall out of your skull:
watch a movie
see a play
listen to some music
attend a service
celebrate a holiday
perform a ritual
open the door when Jehovah's Witnesses come to call
Need some inspiration?  Do the following:
Go to this post on my blog, and see where it is tagged "religion?" Click on the tag and it will take you to all of the myriad books I've tagged as "religion".  In the next month and a half, I'm going to try to review a lot of other books I've previously read so as to add to the list.
Go to the bookstore, and browse around
Look up religions on Wikipedia
Ask me for advice
Steal from other participants' lists
Audio books and cross-overs from other challenges are encouraged.
Do you have to have a blog to join?  Of course not!  I'd be happy to post on here for you...or you can just leave a comment with the book you read.
Soo...Go make your lists!

Hidden Wives Give Away 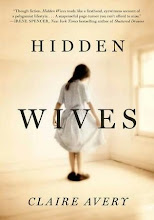 Extra entries for challenge participants! Give away ends 7/23

J.T. Oldfield
this isn't really my blog. 100 Fridays is the name of the book I'm working on for NaNoWriMo and The World Relgion Challenge is a reading challenge I'm hosting in 2010 Visit my *real* blog at http://bibliofreakblog.com